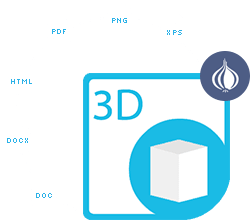 Delete the 3D object from a scene

Triangulate whole file or part of the scene

Get Started with 3D Modeling & Processing in Cloud

Aspose.3D Cloud Perl SDK allows you to transform your cloud apps by including functionality related to loading and extracting scenes from a 3D file without having any external 3D modeling and rendering software on your machine. Once extracted you can easily save it in numerous supported file formats like STL, FBX, PDF, Draco, Universal3D, Discreet3DS, Collada, 3MF, and many more.

Aspose.3D Cloud Perl SDK enables software developers to create a 3D scene by including Camera, light, and numerous other entities. The SDK allows developers to load any 3D supported file or generate a new 3D scene and latter can save it in the PDF format with just a couple of lines of Perl code.

In 3D computer graphics, a polygon mesh is a collection of vertices, edges, and faces that defines the shape of a polyhedral object. Polygonal 3D modeling is widely used in various industries. Aspose.3D Cloud Perl SDK has included support for working with Polygons and has provided several advanced features such as convert all polygons to triangles in 3D Model, triangulation of a simple polygon, generating UV and associate it with the mesh, and more.

Get Started for Free Pricing Information